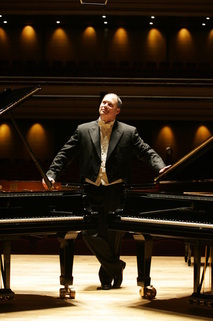 Thomas Hecht is a graduate of the Oberlin Conservatory where he won first prize in the concerto competition and the Kaufmann Award for excellence in chamber music.  Later he was accepted for graduate studies at the Peabody Institute as a student of Leon Fleisher, who was so impressed with the young pianist's abilities that was soon asked to become his mentor’s teaching assistant, an honor which  Fleisher - one of the great pianists of our time - had never before bestowed on any pianist.  His merits and many noteworthy achievements were recently celebrated at Peabody where he was presented with the coveted Young Maestro Award, honoring alumni who have distinguished themselves in their performing careers.

Thomas Hecht is a Steinway Artist and records for the Azica, Elysium and Atoll labels.
For further information visit the Repertoire, the Reviews and the Recordings